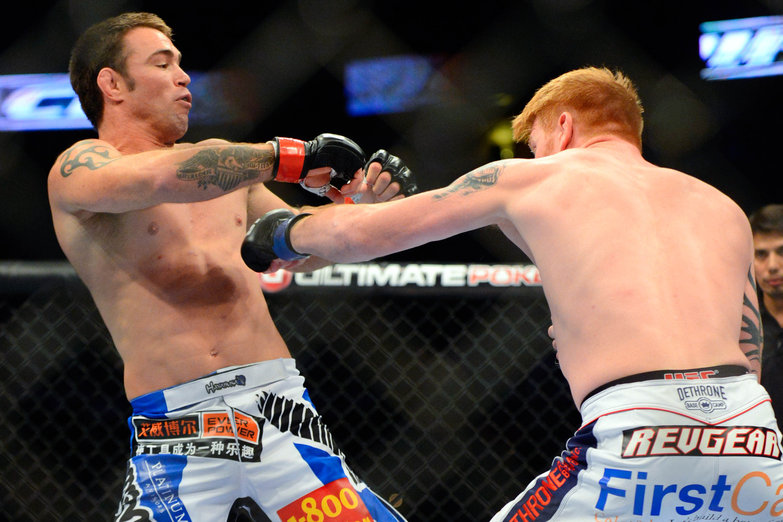 Jake Shields announced Friday via Press release he’d been suspended by the Office of Boxing Licensure within the Colorado Division of Professions and Occupations for taking an unnamed prohibited substance prior to his August UFC 150 middleweight bout with Ed Herman.

MMA Fighting confirmed Monday with a representative of the Colorado commission Shields is suspended for six months for taking a prohibited substance. Their public stipulation of the punishment handed to Shields, however, does not identify which prohibited substance Shields took.

According to Colorado regulation, “participants are prohibited from using any drugs, alcohol, or stimulants, either before or during a bout. Any substance other than plain water or a sports drink approved by the director is prohibited during the event.”

In addition to the six-month suspension retroactive to the day of his UFC 150 bout (Aug. 11), Shields must pay a $5,675 fine. While the fine for his infraction is $5,000, he’s also been ordered to pay a 10 percent ‘additional surcharge’ by the Executive Director of the Department of Regulatory Agencies. Shields must further pay $175 related to administrative costs incurred by the testing company. He has fourteen days to meet those financial obligations as of Monday, October 15th.

In addition, Shields’ bout with Herman has been overturned to a no-contest. Shields initially won the fight via unanimous decision.

We are a Hawaii based website that cover's any and all MMA Event's,Fighter's, & Promoter's. We are a family run site that's main goal is to bring all the MMA information to anyone who want's to know.